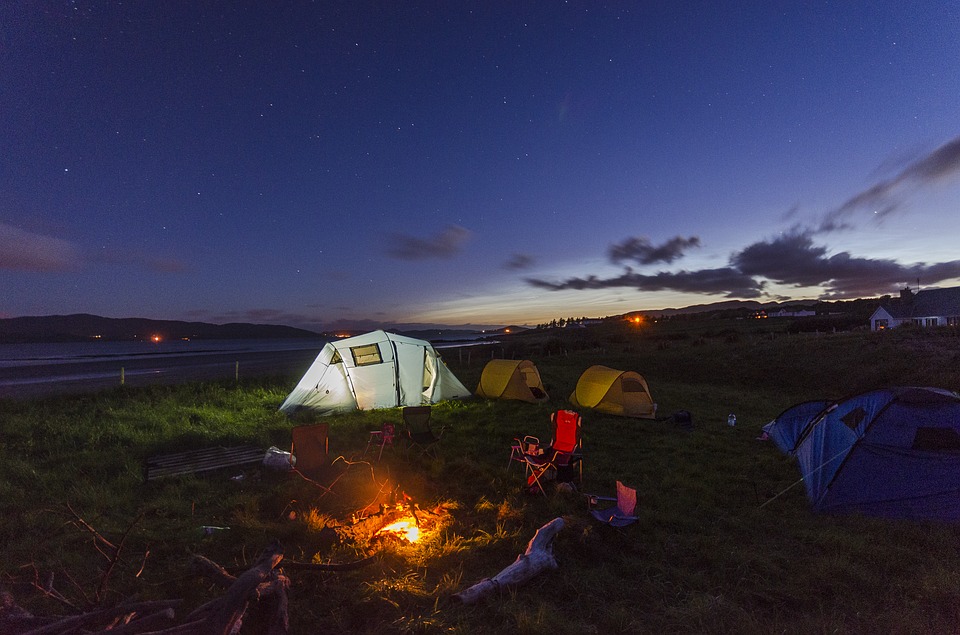 Here are the top 5 best camps in North America for every camp lover. You should visit these places once in life if you really like camping.

Come mid-June, when the snow has receded to distant peaks, you can camp anywhere in this 1.6-million-acre roadless Alaskan wilderness spliced by 12 major lakes. But the park’s sole ranger recommends the west end of 21-mile-long Lake Kulik, the entry point for the kayak-friendly Wood River chain of six lakes connected by rivers. Pitch your tent on the gravelly shoreline at the base of the Wood River Mountains, which rise steeply from grassy hills and tundra to snowy valleys and pencil-sharp spires.

Kayak eastward to a 1,000-foot waterfall that each summer carves a giant ice cave through avalanche debris on Kulik’s south shore. Then run the gentle Class II rapids of the Wind River, which flows into Mikchalk Lake. From here, a 2.5-mile river leads to Lake Beverley, another good place to overnight. If you have at least a week, continue paddling 20 miles to the Agulukpak River, which hosts as many as 2,000 rainbow trout per mile. (They’re catch-and-release only, but you can keep the even more plentiful sockeye salmon.) For fishing permits ($10-$100, depending on the number of days), call the Alaska Department of Fish and Game at 907-465-6085. Tikchik State Park Tours offers six-day guided trips (about $1,500 per person, including airfare from Anchorage; 888-345-2445).

The two-day hike to the summit of El Cap is admittedly less glamorous than free-climbing the Nose, but the payoff’s quite the same: views of Yosemite Valley’s granite walls, Half Dome, and the meandering Merced River.

Bed down in this 5,062-foot-high meadow and you’ll be treated to panoramic views of the Great Smokies and sunrises over 2,000-foot-deep Nantahala River Gorge. The sites are just ten paces from the Appalachian Trail and eight miles via the same route from the renowned Nantahala Outdoor Center.

Flat Tops is a blissful 80 miles away from anything resembling Summit County sprawl. The site sits high atop the glacier-formed plateaus of a set of strikingly atypical Rocky Mountains, in a pond-dotted expanse of tundra and meadows, with pockets of 60-foot spruce firs. Above you looms the basalt summit of 12,000-foot Trappers Peak; down the trail lies the concave-faced Amphitheater, Trappers Lake, Scotts Lake, and four campgrounds crowded with recreators who can’t manage the four-hour hike in.

Since 235,230-acre Flat Tops is designated wilderness, low-tech pursuits reign, namely fishing, hiking, and napping. Skip Trappers Lake’s regulated cutthroat fishery in favor of Wall Lake or several smaller lakes grouped a half-mile north of your camp. Or try the White River’s south fork, a half-mile south. You can keep up to six trout and grill them, since fires are allowed. Before you hike in, stop at Trappers Lake Lodge (970-878-3336) to buy a five-day fishing permit ($18). For a great hike from the site (and expansive views of the jagged Gore Range), follow Trail 1842 for 3.5 miles to the Island Lakes, perched at the plateau’s edge.

Trappers Notch is 150 miles northeast of Grand Junction. Drive east on I-70, and then north on Colorado 13. Two miles past the town of Meeker, turn east on Rio Blanco County Road 8 and follow it for 39 miles to Forest Road 205. Drive ten miles on FR 205, and park at the Wall Lake trailhead. You’ll hike 5.5 miles and gain 1,300 feet in elevation before reaching the lake. Continue another half-mile to pitch your tent near the ponds beside Trappers Peak. For more information, call the White River National Forest’s Blanco Ranger District at 970-878-4039.

A mile below the summit of 9,127-foot Mount Shuksan, thickets of mountain hemlock and Pacific silver fir encircle Lake Ann’s six frigid acres. Dip your toe and pitch your tent at the west end.

The 12.8-mile trek to Davis is so arduous that rangers insist you overnight midway. Your terminus, however, is worth it: a glacial-cirque pond with hundred-foot waterfalls.

Sawmill Lake offers hike-in privacy, waterfront property, and the best part, it’s less than 60 miles from the Times Square IRT station. While admittedly not deep wilderness, High Point comes surprisingly close. It offers 14,218 acres of dense hardwood forest, easy access to the Appalachian Trail, and the tallest peak in New Jersey (though, granted, it’s only 1,803 feet high). And quiet reigns, even on holiday weekends, thanks to strict noise-regulation enforcement. Of Sawmill Lake’s 50 sites, numbers 24-26 and 34-41 are the most coveted, the former for their prime north-shore location and the latter for their seclusion. Always use fanny packs to keep your important documents, money and other things safe and secure with you.

To get the complete To get the complete I-can’t-believe-this-is-Jersey effect, hike from the visitor center to High Point Monument, a 220-foot war veterans’ memorial with the following 360-degree view: Poconos to the west, Catskills to the north, Delaware Water Gap to the southwest. A peaceful 7.5-mile loop starts east of the visitor center on the AT and winds south through the forest to Iris Trail, which overlooks Lake Rutherford. (Iris is also open to bikes, as are several well-maintained paths in the park’s 18-mile network.) You can cast for trout in stocked Sawmill or for a natural selection of bass and catfish in Lakes Marcia and Steenykill. Pick up a fishing license at the Wal-Mart in Franklin (route 23 about 15 miles south of High Point) and rent a canoe at Silver Canoe for a float down the Delaware.

Kettle Moraine’s 25-mile network of mountain-bike trails, rife with namesake glacial obstacles and accessible from Whitewater, make this a top destination for urbanites looking for a Windy City reprieve. There is, after all, a reason that its fans call it the Moab of the Midwest.

Alcatraz views, minus the claustrophobia. For the lights of Fisherman’s Wharf, request a site on the south side; to catch sunrise over the Berkeley hills, grab the east side. And to forget city life entirely, stick with the island’s three shaded interior sites.

Think of a remote perch atop a wind-scoured rib of igneous rock that’s five miles long, a quarter-mile wide, and a stone’s throw from southern California’s busy coast. From the drop-off point at Landing Cove, the seven-pad campground (the only place you’re allowed to sleep on Anacapa’s three islets) is 154 stair steps up and a half-mile hike in. And while the view from your tent is sure to please, East Anacapa’s panoramic piece de resistance is the sunset, viewed from Inspiration Point, a 15-minute walk to the west.

Prowl the islet’s 1.5-mile loop trail to scope out the local residents Anacapa hosts the world’s largest colony of endangered California brown pelicans, not to mention amorous sea lions, harbor seals, and, from April to August, migrating blue whales. From Landing Cove, don a mask and fins to navigate the Channel Islands’ famous kelp forests; add scuba gear to explore the Winfield Scott, a steamer that went down in 1853. Circumnavigation via kayak is the best way to check out the island’s arches, lava tubes, and sea caves (but don’t enter the caves unless you have appropriate experience, as the currents are quite tricky). Ventura-based OAARS (805-642-2912) rents kayaks by the day, along with full-day guide services.

Avoid the mucky salt-marsh interior of this 7,700-acre isle, pitching your tent instead beneath the wind-bent cabbage palms along its empty sands. Bring your binoculars for glimpses of buntings, tanagers, and northern parulas.

Details: camp on the southern tip of the island; no fees

Paddle ashore and head for the central clearing in this conifer-forested nubbin of rock off Isle Royale’s southeast coast. Settle down in either of its shelters before striking out to explore the waters of nearby Raspberry and Caribou Islands.

Cool off in the spray of the five-story-high, three-tiered lower falls, located about a mile’s walk upstream. A few hundred yards farther, past the 30-foot upper falls, you’ll find a footbridge that links up with the Superior Hiking Trail. Follow its 3.5-mile traverse of the 1,641-acre park and continue as far as feasible along its 220-mile route. From the campground, bikers should follow the road to Minnesota 61 and cross the bridge; the trails north of the river furnish short yet steep hills aplenty. Along the Superior shoreline you can kayak, cast for trout, and jump right in (though the 40-degree summer water will have you scrambling ashore awfully fast).

Gooseberry Falls is 200 miles north of Minneapolis. Take I-35 through Duluth and then follow Minnesota 61 north through Two Harbors. Thirteen miles farther you’ll find the park entrance; follow signs to the campground. Sites cost $7 per night, plus $8.50 reservation fee and $7 for a vehicle permit per day. Call the Minnesota State Parks reservation line (866-857-2757) at least 90 days in advance. For general information, call park headquarters at 218-834-3855.

The tent-only area near the lake’s southeast shore fills up by 9 a.m. in summer months. So arrive early and be pushy. Then hop a ferry across the lake and pick up the Paintbrush CanyonTrail loop, where for 19.5 miles it’ll be just you, 2,000-foot granite canyon walls, and a black bear here and there.

A welcome diversion from U.S. 50 (aka the Loneliest Road in America) is Site 23. At 9,950 feet, it’s nestled on the edge of a meadow with 13,063-foot Wheeler Peak, Nevada’s second highest, looming just 4.5 miles away and stands of 4,000-year-old bristlecone pine nearby.

A black-sand oasis on the south coast of Hawaii Volcanoes National Park, Apua Point is a mere ten miles from Kilauea, the world’s most active volcano and thus one of the only campgrounds in the country where you’re likely to see bona fide eruption activity. Limited to 12 campers, the primitive site requires a three-hour hike over undulating pahoehoe lava and is lapped by a swim-nixing undercurrent. But after a hot day of climbing around Ma Nature’s version of asphalt, the ocean breezes offer restoration and the regular crash of waves encourages deep sleep, reason enough, apparently, for green turtles to crawl ashore and nap on the beach with you.

Lace up your day hikers for the ultimate geological field trip. Three hundred yards from the end of Chain of Craters Road is the ranger-approved spot for viewing the fireworks. To get closer to the action but not too close set out early, bring sunscreen and water, and hike 3.5 miles farther, to where Kilauea pumps 130,000 gallons of lava per minute into the Pacific via an underground tube. When the liquid-hot magma hits the sea, steam billows and toaster-size rocks explode skyward. Give the eruption zone a wide berth and always stay a quarter-mile inland—newly formed land can collapse without warning. (The kayaking here is also for the brave and/or foolhardy.) To explore more of the 218,000-acre park’s otherworldly landscape, hike the half-mile Pu’u Loa Trail, which leads to 25,000 petroglyphs, or the Pu’u Huluhulu, an hour’s walk to the summit of a prehistoric cinder cone.

Hawaii Volcanoes National Park is 30 miles southwest of Hilo on the Big Island. Take Hawaii 11 to the visitor center near the park entrance, where you can pick up a seven-day vehicle permit ($10) and backcountry permit (free, available no more than one day in advance). Then follow Crater Rim Drive to Chain of Craters Road and the Pu’u Loa parking lot. From there the Puna Coast Trail winds 6.6 miles to Apua Point. For more information, call park headquarters at 808-985-6000.

Claim a site in the secluded far west corner of the park amid stands of cottonwood and green ash. Come equipped with earmuffs, both for warmth and to muffle the racket of hundreds of thousands of honking sandhill cranes launching from the banks of the Platte River at sunrise, no less.

Why risk frostbite to view the aurora borealis when you can see it, atmospheric conditions willing, from relatively balmy climes at 53 degrees north latitude? Namely this spruce-sheltered site on the fjordlike shore of Lanezi Lake, three days’ paddle from the park visitor center.